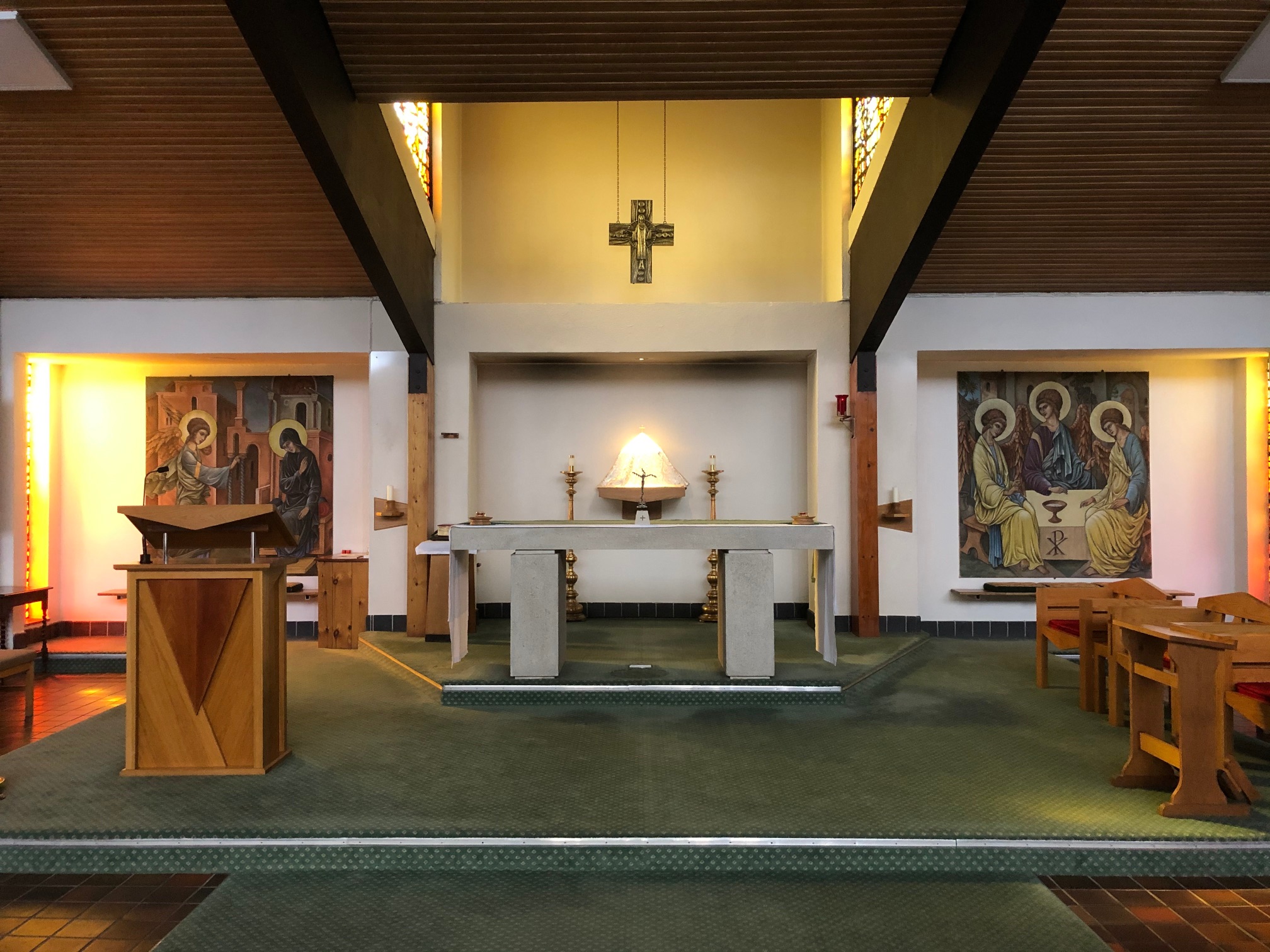 A history of the parish

Our Church dedicated to Our Lady of the Portal and St Piran was opened on 17th May 1973 by the Bishop of Plymouth, the Rt Rev Cyril Restieaux. The new building replaced a much smaller church dedicated to St Piran, in Chapel Hill which had served the Roman Catholic community since June 1885.

The Catholic community had grown, there was need of a larger church and in 1964 the decision was made to buy land in St Austell Street on which to build a new church. Somewhere nearby in medieval times a chapel existed by the entrance to the town. Dedicated to Our Lady of the Portal, it recalled the devotion to Mary, the gate of Heaven. There are references in fifteenth century wills to sums of money being left for the support of this chapel, now long disappeared. When the new church was opened it was decided to add the dedication of Our Lady of the Portal to that of St Piran to be the title of the parish. A statue of St Dominic near to the baptistery is a reminder of the Dominican Priory which was closed down at the time of the suppression of Monasteries under Henry VIII.

The beginnings of the modern parish go back to 1845 when the Redemptorist Order, then in Falmouth obtained a small property in River Street, to be a Mass centre for the Catholics of the Truro area. A Fr Louis Bougenoms took responsibility for the mission. Earlier there had been a French émigré priest, Abbé Mauron, living in Truro, but he had returned to France around the time of the restoration of the Bourbons.

After a few years the Redemptorists moved to Clapham and Truro is often missing from the Catholic Directories of those years until 1883 when Fr John Granger is at River Street celebrating a Mass each Sunday at 9.00am. Fr Granger,a man of considerable private means, related to Charles Eyre, the first post-Reformation Roman Catholic Archbishop of Glasgow, had delicate health and had been advised to come South to enjoy a milder climate. During the five years he spent in Truro, he entrusted the Cornish architect, Sylvanus Trevail with plans for a church and presbytery.
The building cost £2,000, which was ‘defrayed by the incumbent.’ To mark the completion Fr Granger gave the workmen ‘an excellent supper.’

Ill health forced Fr Granger to retire to Exmouth, where the climate was considered to be milder. In due time he was responsible for building the Catholic Church there. When he moved from Truro he left the property to the community of the Canons Regular of the Lateran at Bodmin. Various priests helped to provide Sunday Mass until the appointment, in 1891, of Fr Norbert Jones CRL, a man of great charm, ‘gifted with a ready flow of the blarney’. He was an Irish Jones, woe betide those who mistook him for a Welsh Jones, and well-known for missing the Truro train because he had stopped to chat with someone encountered on the way to the station. This reputation caused him to be known as ‘tramping Truro Jones’.

There has been a resident priest in Truro since 1901 when Fr George Holden CRL moved into the Presbytery in Dereham Terrace. Until 1985, along with other parishes in Cornwall, the Catholics of Truro were served by priests from the Canons regular of the Lateran. When the Code of Canon Law was promulgated in 1918 Truro officially became a parish and Fr William Riley CRL was appointed ‘parochial vicar’. He was followed by Fr John Jeffrey CRL who served the parish for 37 years, and who died on 11th August 1963 while assisting at Mass in St Piran’s Chapel.

In 1985 the Canons Regular of the Lateran, ‘the Bodmin Fathers’ celebrated almost 100 years of priestly ministry in Truro and requested Bishop Restieaux to take over responsibility for their work. Since then the parish of Our Lady of the Portal and St Piran has been looked after by clergy of the Plymouth diocese.